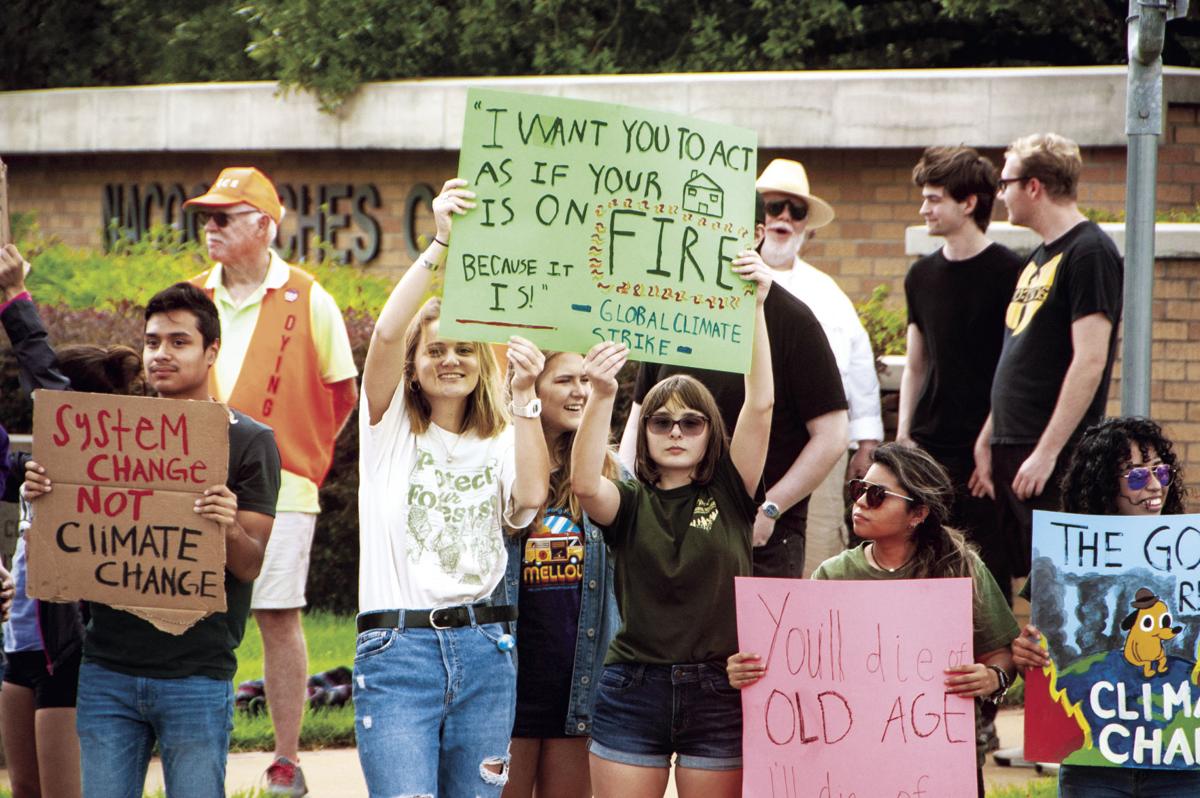 Two SFA students hold up their signs as cars drive by on the corner of West Main and South streets in Nacogdoches on Friday. The strike brought together Nacogdoches community members, alumni from out of town and SFA students. 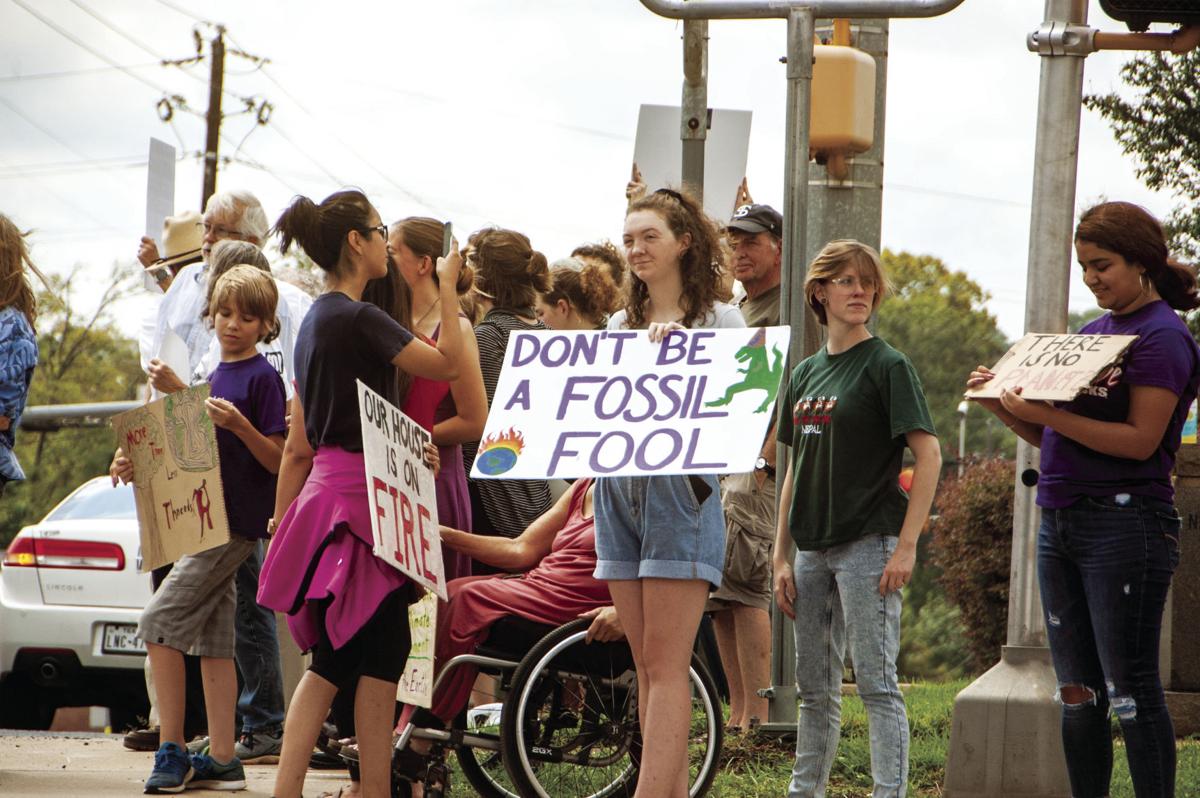 Keenan Spencer, forestry major from Houston and vice president of the horticulture club, holds up a sign that says, “Don’t be a fossil fuel.” Spencer said we are speeding up climate change.

Two SFA students hold up their signs as cars drive by on the corner of West Main and South streets in Nacogdoches on Friday. The strike brought together Nacogdoches community members, alumni from out of town and SFA students.

Keenan Spencer, forestry major from Houston and vice president of the horticulture club, holds up a sign that says, “Don’t be a fossil fuel.” Spencer said we are speeding up climate change.

Resilient Nacogdoches hosted a Global Climate Strike on the corner of West Main and South streets on Friday. There was another silent protest at 7:30 p.m. Friday at the Nacogdoches County Courthouse.

The Global Climate Strike is an international movement being held during lunchtime hours to encourage activism for climate change.

The movement is happening in over 150 countries where people are encouraging youth climate strikers to demand an end to the age of fossil fuels.

The Global Climate Strike movement stemmed from the viral #FridaysForFuture, which began in August 2018 after then 15-year-old Greta Thunberg sat in front of the Swedish parliament every day for three weeks to protest the lack of action on the climate crisis. Thunberg took to Instagram and Twitter, and the movement soon became viral.

In September, Thunberg decided to strike every Friday. People around the world are joining in.

The Global Climate Strike held in Nacogdoches brought together community residents, alumni and students for a common cause.

Alumni Cynthia and Leonard Reese from Tatum attended the strike for a specific reason.

“We heard about Greta Thunberg only last week. We began to look online to see if we could figure out where the nearest climate strike was to us, and the nearest one was here in Nacogdoches. We always love coming to Nacogdoches because we went to school here in the ’70s and met here,” Cynthia Reese said.

“He’s incredible. He’s 2 years old now and I want there to be trees and forests and mountains and streams and animals to see,” he said.

“I don’t want it to all end... we need to save each other and our environment first,” he said. His wife said she’s concerned about the fossil fuels we’re using today.

“I do recognize that this [cutting back on fossil fuels] will harm some families as far as their jobs go and financially. My hope and prayer is that we can come up with ways that we all can transition. This all really needs to change a lot within the next five or 10 years,” she said.

The Reese’s encourage everyone to be aware of what’s going on around them and to use their opportunity to do something about climate change. They said the Global Climate Strike event they attended was a step to increase awareness.

Jordan Johnson, Nacogdoches community member, said that going to the Climate Strike, to her, was about showing urgency.

“Especially here in the Piney Woods, where people have been involved in all kinds of extractive industries and are now really looking to take a stand and hold all of these corporations accountable for the short and long-term consequences,” Johnson said.

Johnson encouraged people to educate themselves and read articles on what climate scientists are saying.

Jocelyn Moore, liberal arts studies major, said that she attended the event because she cares about her and her children’s future.

“If it takes the younger voices to skip school and skip work and strike to make that known, we’re here for it,” Moore said.

Moore said that there are already food and water scarcities and environmental issues that people need to pay attention to.

Moore’s 11-year-old son Oliver skipped school to attend the strike. A sign he was holding was a reference to the movie, “The Lorax.”

“The thneeds, it’s from The Lorax. They started cutting down a lot of the trees and making these weird thneed things that didn’t make any sense, and that’s kind of what’s happening in the world now,” Moore said.

He said he believes he is helping stop global warming by attending the march and that he hopes that people who drove by also want to help.

Keenan Spencer, forestry major from Houston and vice president of the horticulture club, said she attended the event for many reasons.

“Climate is changing. Stuff is melting, pollution is at an all-time high, people aren’t paying attention to what they need to and focusing more on themselves instead of the future of this planet. We don’t have a second planet. This is all we have,” Spencer said.

She expressed that agriculture won’t survive in the next few years.

“Scientists say climate change is real. Climate change is a normal thing for the history of this planet, but we’re making it go faster. Instead of it being a slow wave, we’re spiking it up. We need to slow that down, reduce our emissions, reduce our pollution and slow it down,” Spencer said.

Climate strikes are happening every Friday across the world. To learn more about the Global Climate Strikes happening now, visit globalclimatestrike.net.