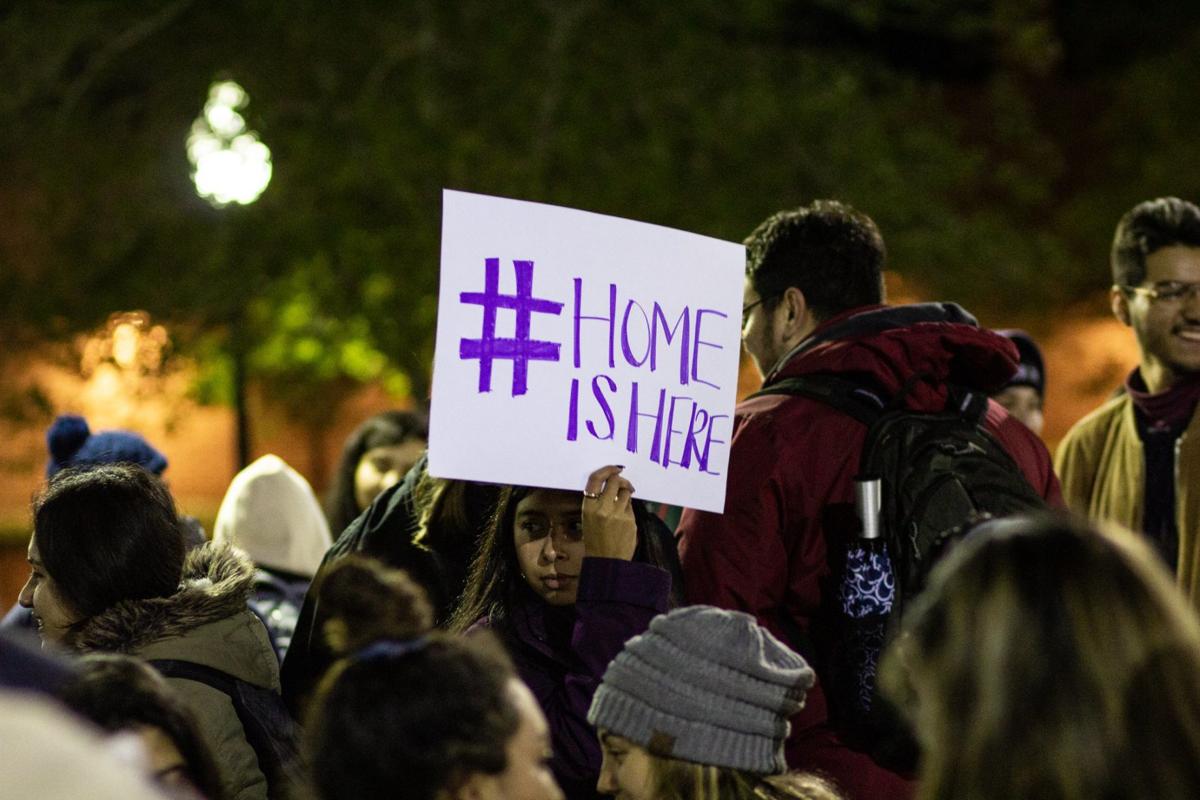 Students gathered at Surfin’ Steve on Tuesday night to rally for DACA as it heads to the Supreme Court. Ana Aguirre, junior international and intercultural communication major from Nacogdoches, holds a sign that says #HomeIsHere, a hashtag that Texas Rising is using to raise awareness. Four DACA recipients shared their stories at the event. 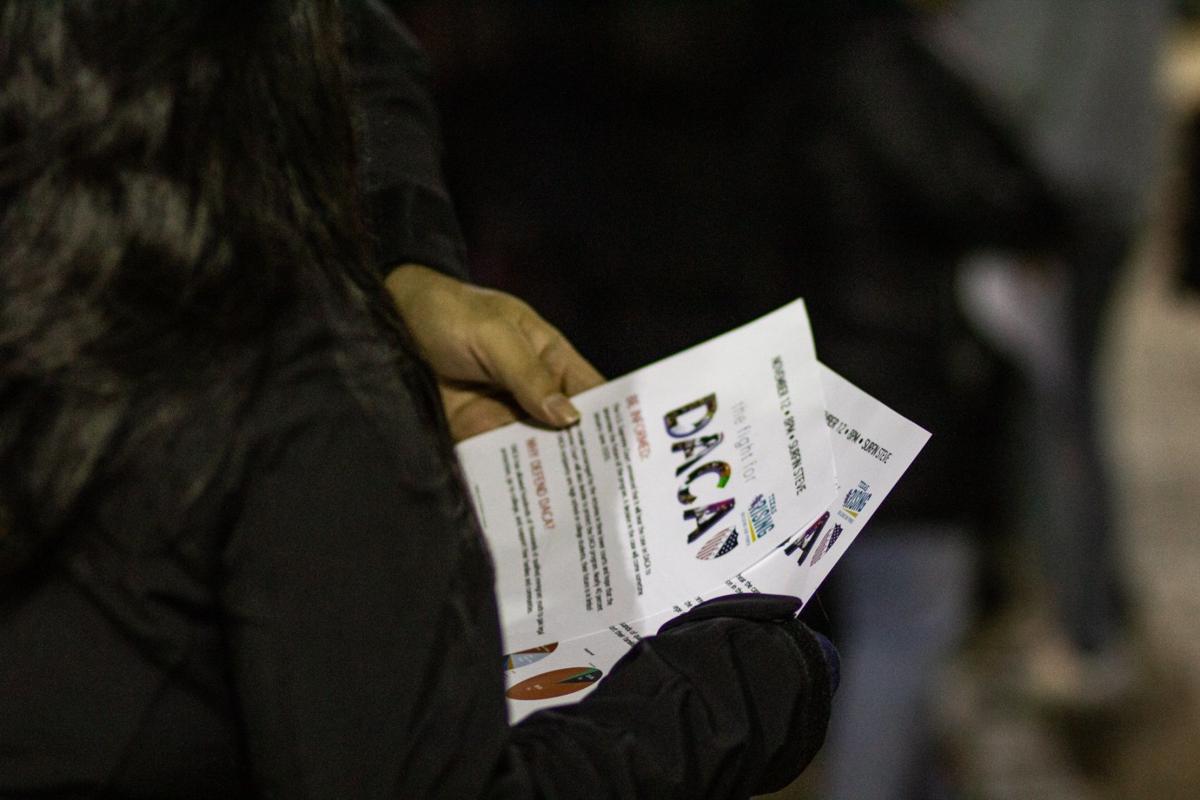 Students were given information on what DACA is and how it will affect recipients, also known as Dreamers.

Students gathered at Surfin’ Steve on Tuesday night to rally for DACA as it heads to the Supreme Court. Ana Aguirre, junior international and intercultural communication major from Nacogdoches, holds a sign that says #HomeIsHere, a hashtag that Texas Rising is using to raise awareness. Four DACA recipients shared their stories at the event.

Students were given information on what DACA is and how it will affect recipients, also known as Dreamers.

To show support SFA students with Deferred Action for Childhood Arrivals, Texas Rising and United We Dream partnered to rally at Surfin’ Steve on Tuesday night as the case heads into the Supreme Court to be reviewed.

DACA is a program that shields children of immigrants who were brought to the United States from deportation. This week, the Supreme Court is considering whether the Trump administration can shut down DACA, a program introduced in 2012 as an executive order by the Obama Administration.

“If I could motivate somebody, that would be amazing,” Texas Rising President Cerena Haefs, a junior political science major from Dallas, said. “To speak out, you’re not alone on this. I want people to walk up to Surfin’ Steve, especially DACA students, Dreamers, to see, ‘These people are here for me.’”

Haefs said that many people don’t know about DACA, which allows for recipients, also known as “Dreamers,” to study and work in the United States, as well as receive health insurance from employers and drive legally.

“It’s a very huge opportunity to a lot of kids, so it’s just sad that not everybody knows about it,” Haefs said. “But also, there’s people out there that don’t want [DACA] to be here.”

For people that want DACA to be shut down by the administration, Haefs said that Dreamers have not broken the law.

“They’ve been here since they were kids,” Haefs said. “They probably have been more patriotic than other people. They contribute to society. A lot of facts are reworded, so they think DACA students are taking money. In reality, they’re not. If anything, they’re contributing to society.”

Haefs said that people don’t know what DACA is and they don’t want to hear it. She said she doesn’t understand how anyone can judge something they don’t know.

“Why don’t you hear what they have to say?” Haefs said. “Why don’t you talk to a DACA student? See their perspective. See what their life has been like for the past X amount of years. Talk to them. Learn about it.”

While it does not provide a pathway to citizenship, DACA recipients who were approved, must renew the status every two years. Flor Rosique, a sophomore biochemistry major from Nacogdoches, is a DACA recipient and has renewed it punctually. Rosique said that right now, the processing fee for renewing every two years is $495, and going through immigration lawyer is an added $500.

“I remember me getting tired, and my mom carrying me on her back,” Rosique said. “I was 4. I was really tired. I remember walking through cactuses and getting those little pricks on your skin. Whenever we did cross, we crossed the Rio Grande. I remember, we crossed with a giant [tire]. My mom got on there, she put me on her lap and we paddled across.”

When they arrived in the U.S., they were stopped by border patrol and were deported. A week later, her mother said they were going to give it another try, and Rosique and her mother finally made it into the U.S.

“My dad had already come here a year before us,” Rosique said. “I remember I was so happy to see his face one more time. It had been a whole entire year. I remember that. It’s been a long journey, from me being 4 years old, up to here. We’ve endured so much. We’ve gone through so much.”

Now an SFA student, she said it’s a horrible feeling seeing discrimination against immigrants from all over the world.

Although she’s lived in the United States since she was 4, Rosique’s biggest fear every single day is that she may be deported to Mexico, a country that she has not been to since she was very little.

“Knowing that my future here is uncertain, sometimes, it’s not so much about the physical work you have to do, but the mental stress,” Rosique said. “It’s so much pressure.”

Rosique said she’s not certain she’ll be able to renew her DACA.

“Sometimes I feel discouraged,” Rosique said. “I’m working so hard toward my degree, my work. What if it’s for naught? What if I don’t end up finishing my degree because I might get sent back to my home country? Sometimes, I’m like, ‘Is this all worth it?’”

Rosique said that if she was to get deported to Mexico, she wouldn’t know the economy, pesos, where to work or where to live.

“There’s so many factors to consider,” Rosique said. “I’ve always said I wanted to go back to the beach, Cancun, but I really don’t know how the economy is there. What would I do? What would I live off of?”

Another option for Rosique is self-deportation.

“It’s called the land of opportunities to only certain people,” Rosique said. “Not everyone is open to the same opportunities. One of those opportunities is the opportunity to travel. I can’t travel outside of the United States. I feel like I’m missing out on seeing so much of the world.”

Another thing that Rosique said that is important today is the immigration system.

“The immigration needs to be fixed so there’s an easier way to come here. Put yourself in their shoes. I’ve seen those comments, ‘Illegal is illegal’ but they would do the same thing. It’s about survival. They’re [immigrants] wanting to come here to survive. If you wanted the best for your children, you’d do the same thing.”

Michael Armstrong, a junior marketing major from Houston, is a conservative who said that he agrees that DACA should stay.

“I feel that DACA is a good program,” Armstrong said. “In today’s political atmosphere, it’s important to remember people and basic human rights. These kids grew up here in America and know our culture. It is their culture.”

Armstrong said that moderate conservatives would agree with him if they see both sides.

“A lot of us lean more right but do agree on some liberal policies,” Armstrong said. “There will be some who don’t agree with it, and their reasoning is understandable. But, in my case and many others’ cases, no one wants to see kids suffer.”

Armstrong said that there were some conservatives who would disagree with DACA because it could influence parents to send their kids to allow them to come to the U.S. They believe DACA could be misconstrued as a motivator.

“I personally don’t like it when it comes to that,” Armstrong said. “The parents send their kids here to live a better life, but they send them on these long journeys with [coyotes] who [couldn’t] give less than two cares about them. Or they ride the top of a train to get further quicker. A lot of deaths and injuries happen on these journeys for a better life. That’s at least what I’ve been told.”