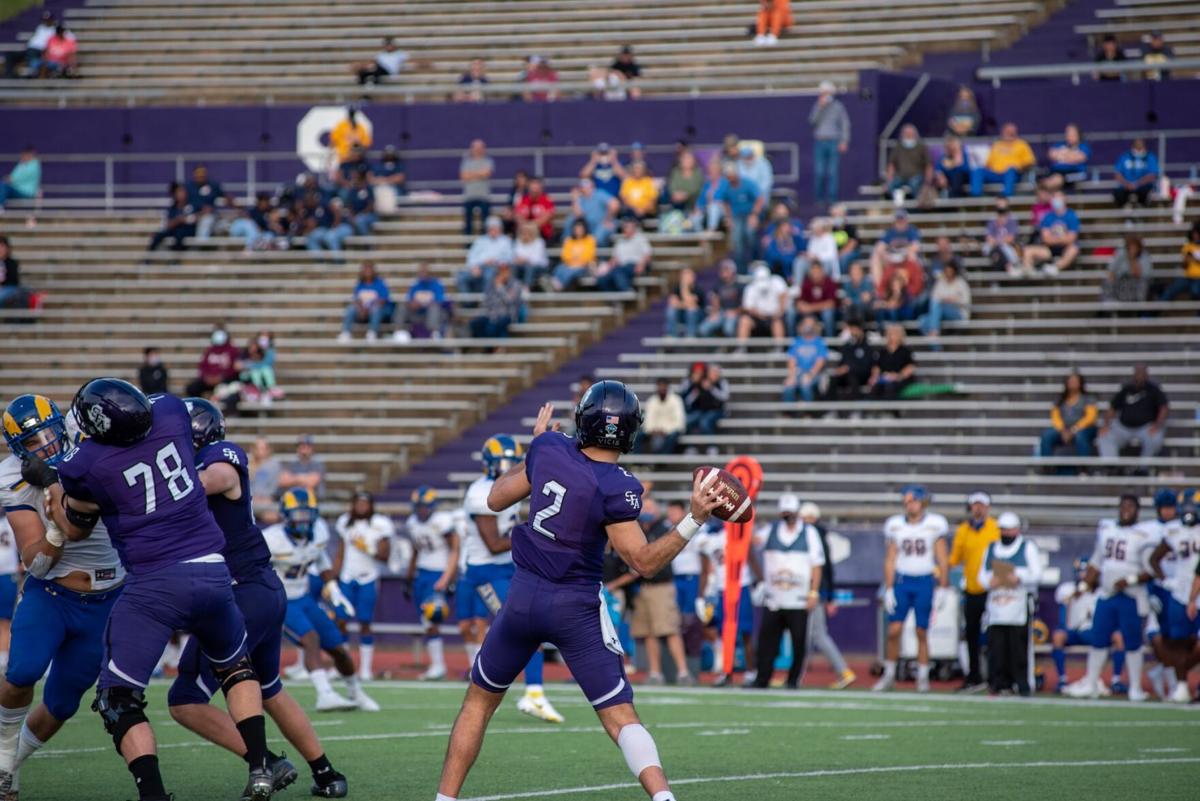 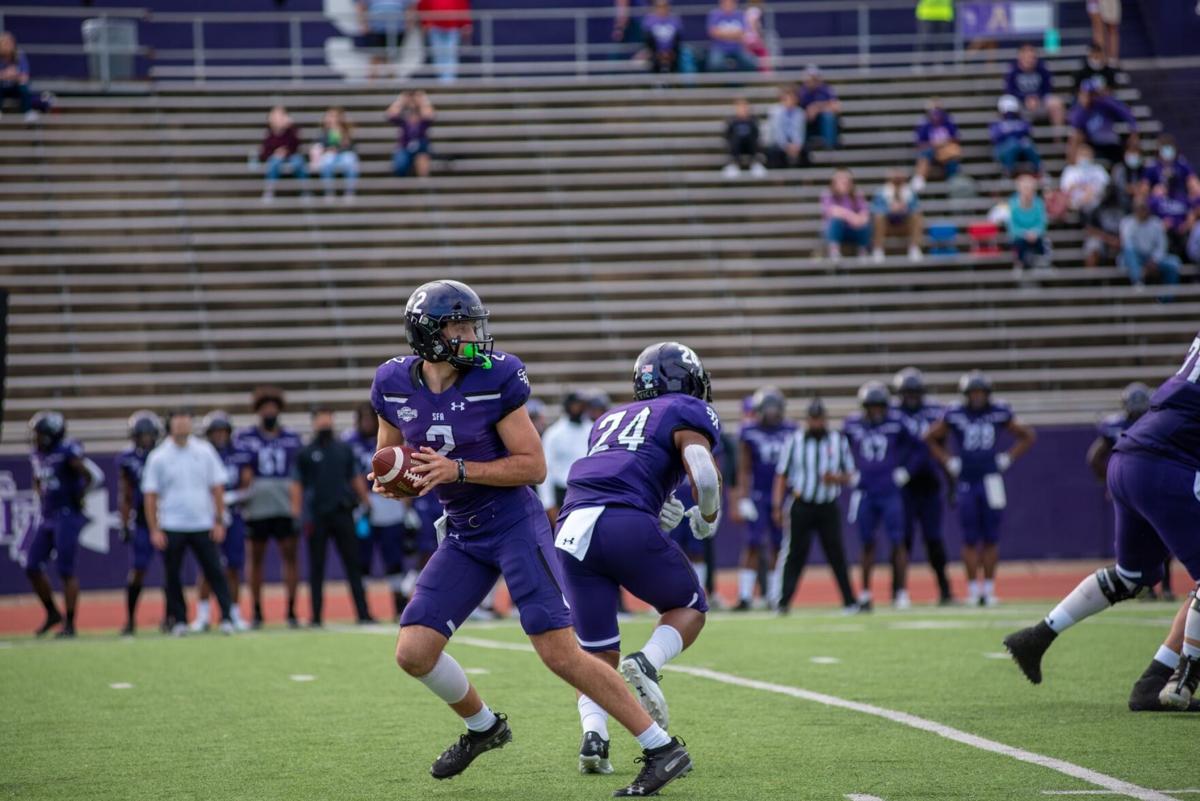 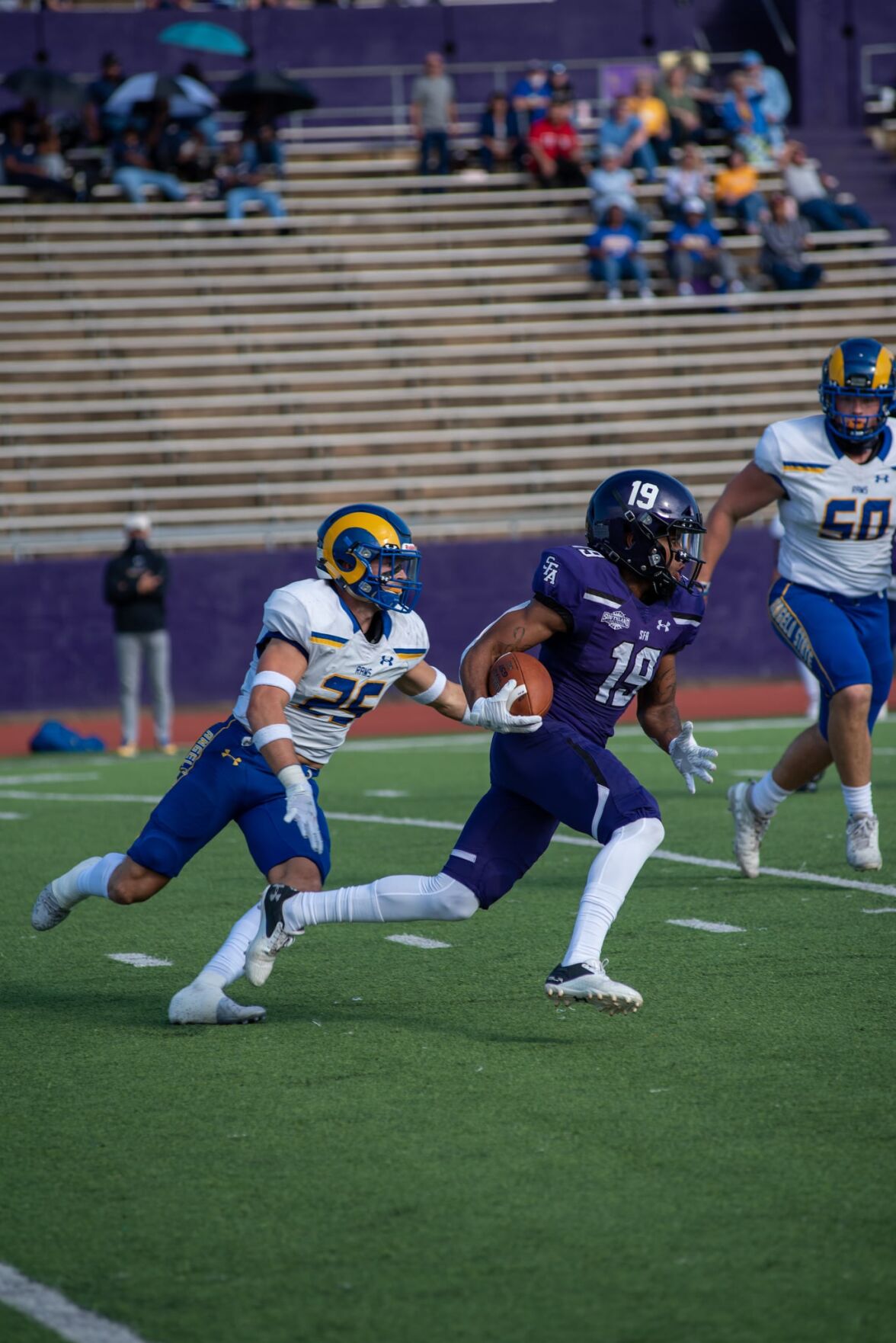 The Jacks were without Head Coach Colby Carthel, who tested positive for Covid-19 days prior to the contest. His father, Don Carthel, stepped in as the interim head coach and led SFA to victory.

“We’ve got to give Angelo State a lot of credit,” Carthel said. “They came here ready to play, and they're a really good football team. They gave us trouble, and we’ve got to get better.”

The Rams outgained the Jacks 381-280, but the difference in the game was due to the play by the SFA special teams unit. Max Quick downed two punts deep in ASU territory, and sophomore wide receiver Xavier Gipson returned a punt 37 yards for a touchdown.

He was responsible for three of the four Lumberjack touchdowns on the night. The former freshman All-American hauled in five receptions for 177 yards and two scores.

Freshman returner Korbyn White took the opening kickoff 84 yards down to the Angelo State 11, but the Rams forced a turnover on downs to prevent SFA from scoring.

After trading punts, the Rams went for a 34-yard field goal, but junior kicker Jared Defelice missed it wide left.

After two false start penalties were called on the Jacks, junior quarterback Trae Self found Gipson and broke it loose for a 90-yard touchdown to go up 7-0 with 1:56 left in the first quarter.

Angelo State answered back by getting to the end zone in 10 plays as junior quarterback Zach Bronkhorst connected with sophomore tight end Cason Brown on an 8-yard touchdown pass. The extra point attempt was no good, bringing the score to 7-6 SFA with 11:57 left in the second quarter.

SFA got on the board again as Gipson ran after an ASU bouncing punt and ran it 37 yards to the end zone making it 14-6 Jacks.

Redshirt freshman kicker Chris Campos extended the lead once more by booting a 45-yard field goal with 9:36 left in the third quarter.

The Rams scored again as Alfred Grear ran it 38 yards to bring Angelo State within five points. They decided to go for two, but came up short on the conversion for a 17-12 score with 7:03 left in the third quarter.

SFA extended the lead as Self found Gipson on a 76-yard pass to go up 24-12 near the end of the 3rd quarter. The signal caller went 11-27 with 197 yards, two touchdowns and two interceptions.

Senior running back Da’Leon Ward scored the final touchdown of the night on a 9-yard touchdown run to make it 31-12 with 13:20 remaining in the game. He finished the night with 43 yards on 11 carries.

SFA returns to action at 12:30 p.m. next Saturday for a historical game with Southland opponent Abilene Christian. They will play in the first ever college football game at Globe Life Park in Arlington, former home of the MLB’s Texas Rangers. Q107.7 will provide a radio broadcast.