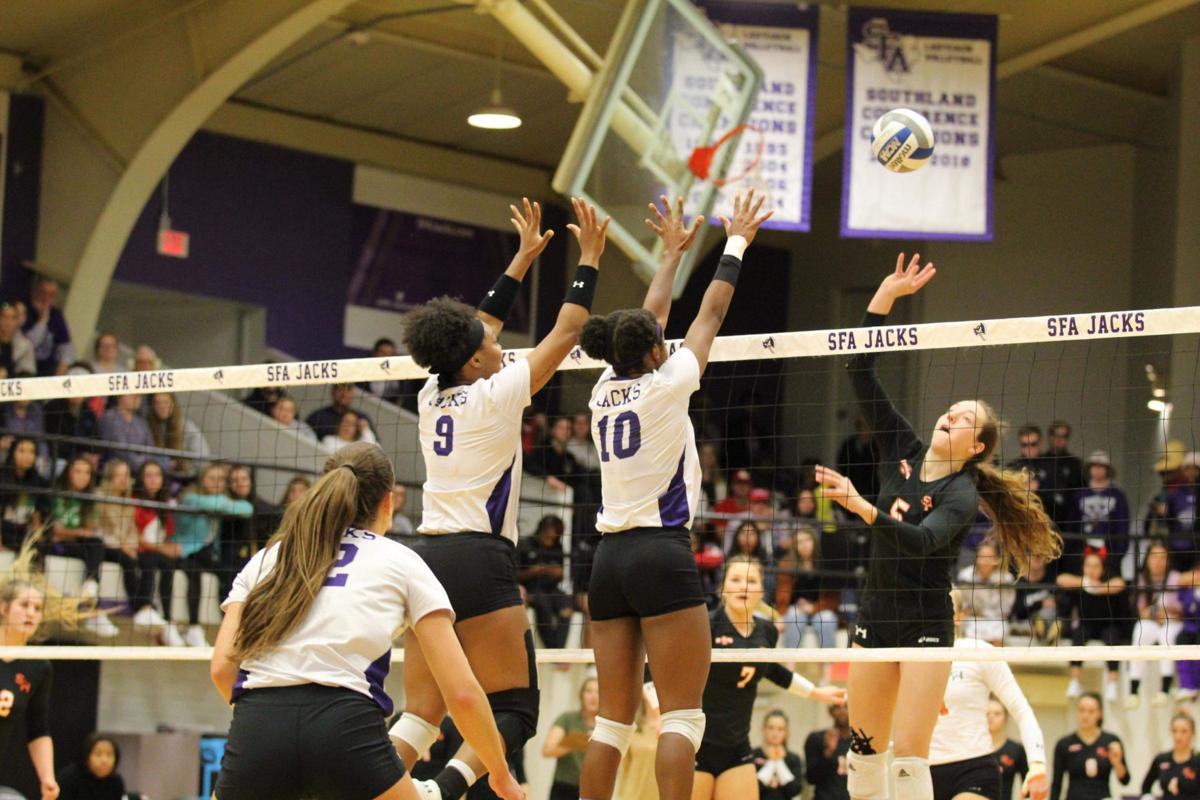 Senior middle blocker Danae Daron and senior outside hitter, Xariah Williams, jump for a block against the Bearkats. 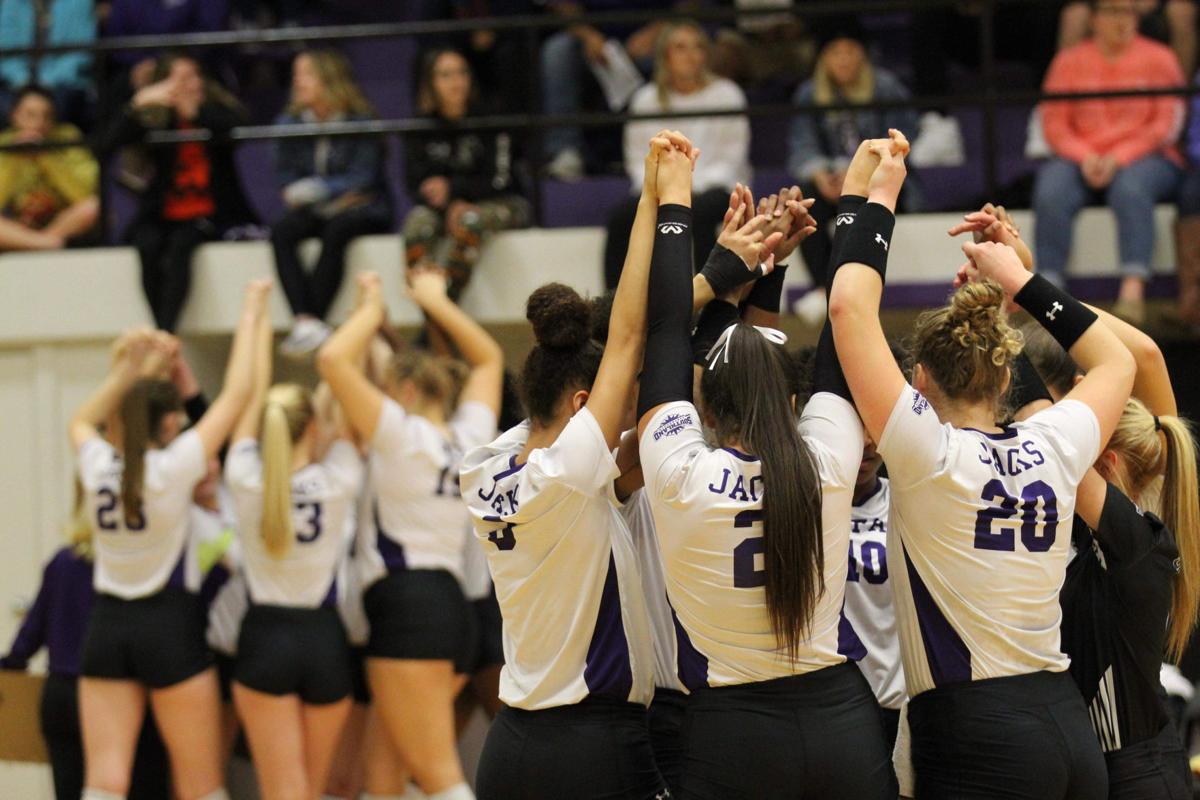 The Ladyjacks celebrate their win against the Bearkats. The win kept SFA undefeated in the conference with an 11-0 record and a 16-game winning streak.

Senior middle blocker Danae Daron and senior outside hitter, Xariah Williams, jump for a block against the Bearkats.

The Ladyjacks celebrate their win against the Bearkats. The win kept SFA undefeated in the conference with an 11-0 record and a 16-game winning streak.

The SFA volleyball team defeated the Sam Houston State Bearkats 3-1 on Thursday in Shelton Gym to remain undefeated in the Southland Conference.

After beating second-ranked McNeese and third-ranked Sam Houston, the Ladyjacks hold a 23-1 overall record, an 11-0 conference record, a .958 winning percentage and a 16-game winning streak.

In the beginning of the second set, both teams traded points until the Ladyjacks went on a 5-1 run to extend their lead 12-8. After a timeout and adjustments made by SHSU, the Bearkats went on a 6-3 run to make the score 14-17. A 5-0 run by the Bearkats tied the game 20-20 before a kill by senior middle blocker Danae Daron and senior outside hitter Corin Evans gave them a lead 23-21.

SHSU regained the lead 24-23. An attacking error tied the game 24-24 and the Bearkats were able to lead 25-24 with one point away from winning the match. A 3-0 by the Ladyjacks from kills by junior middle blocker Margaret Dean, senior setter Ann Hollas and Evans gave SFA a 27-25 win in the second set.

Hollas has an even 1,000 career digs for the Ladyjacks.

With a tied 1-1 game, the Ladyjacks were able to take the third set with a 27-25 win. An 8-2 run allowed SFA to extend their lead and win the game in the next six points. In that run, junior middle blocker Taya Mitchell had back-to-back kills.

In the fourth set, the teams started off once again by trading points as SFA led 10-9. A 5-2 run gave SFA a 17-12 lead before the Bearkats went on a 10-0 run after several attacking errors made by SFA to take the lead 22-17. The Ladyjacks had a 6-1 run to tie the set 23-23. Sam Houston was one point away from winning the set after a kill from freshman outside hitter Samantha Rodgers. SFA was able to go on a final 3-0 run with two kills by Evans and a service ace by junior defensive setter Bailey Mulder to win the set 26-24.

For the Bearkats, senior defensive setter/ libero Addison Miller had a season high of 40 digs. Junior outside hitter Ashley Lewis lead the offense with 20 kills and acquired a double-double with 18 digs.

For the Ladyjacks, Evans led the team’s offense with a season high of 20 kills and a .231 attacking percentage. She also acquired her 11th double-double for the season with 16 digs. On defense, Daron had eight kills. Hollas led the team in digs with 25, 18 from junior defensive setter Madelynn Miller, 15 from freshman outside hitter Ariana Pagan and 11 by Dean.

The Ladyjacks will play Houston Baptist University at 1 p.m. Saturday in Houston.